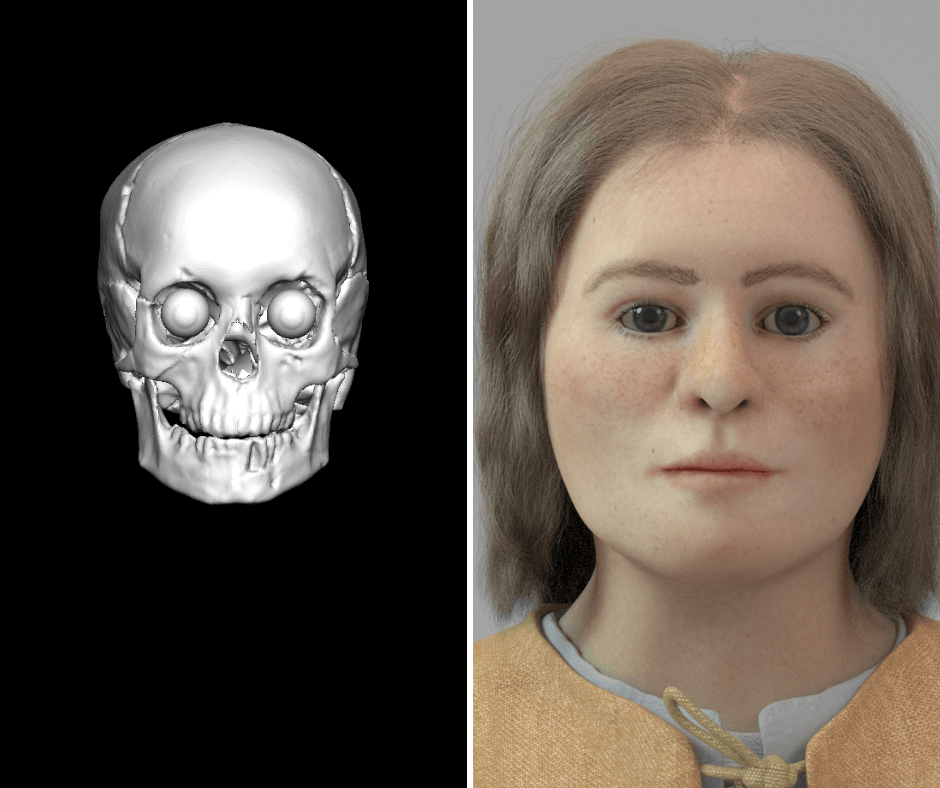 Reconstructing the Face of a Medieval Kilkenny Person

The Medieval Mile Museum’s new project gives a fascinating insight into the people of Kilkenny’s medieval past.

With funding from Failte Ireland, the museum commissioned Face Lab at Liverpool School of Art and Design to reconstruct the face of a skeleton uncovered on the museum site during archaeological excavations in 2016.

Face Lab is an innovative interdisciplinary research group, at the interface of art and science. They have worked on many high profile projects, including the facial depiction of King Robert the Bruce of Scotland.

The skeleton was found beneath the entrance gate to St Mary’s churchyard during the 2016 archaeological excavations, together with eleven other burials, radiocarbon dating between 1310 and the 1600s. Recorded as Skeleton B37, osteoarchaeologists estimated the individual to have been 13 to 14 years old when they died, most likely as a result of lingering infection. There is no evidence that the person died due to violence or injury. As the individual was an adolescent, their sex cannot be accurately confirmed.

The eleven skeletons uncovered at St Mary’s gate were buried in simple winding sheets, rather than coffins. During this era, the wealthy had the means to be buried within St Mary’s Church, with intricately carved effigies and elaborate vaults to commemorate them. However, the less wealthy were buried in the grounds of the churchyard, with less visible markers of remembrance.

Curator of the museum, Grace Ries, commented; “Craniofacial reconstruction allowed the forensic rebuilding of Skull B37, to create a precise as possible picture of the person’s face, giving an emotive insight into the people of Kilkenny’s past who did not have the means to have their names written in stone in remembrance of them.”
This Kilkenny person would have lived through a tumultuous and dramatic period in Kilkenny’s history, possibly during the Black Death which ravaged the city in the 1340s or during the rule of the Confederation of Kilkenny in the 1640s.

Their bones bear the marks of physical labour, revealing that this person worked hard for a living. All too often, the names and lives of ordinary people fade into the mists of history. Face Lab’s incredible craniofacial reconstruction brings us face to face with a lost chapter in Kilkenny’s past. We do not know the name of this Kilkenny person, however we can recognise them once again as a former citizen of this city and as a shared contributor to its extraordinary heritage.”

How did Face Lab create the reconstruction?

Skull B37 was 3D scanned in the museum. Face Lab then used the 3D files to create a digital model of the skull for virtual sculpting. Following anatomical standards, the practitioners sculpted muscles on to the surface of the skull, and used tissue depth pegs to estimate the thickness of the facial soft tissue. This recreates the unique facial characteristics of the person.
The model was then exported into different 3D computer graphics applications, where colour, texture, hair and clothing were included. The result is a visualisation of the person’s face based on historical information and the contemporary population.

Project manager of Face Lab, Dr. Jessica Liu, commented; “3D computer graphics applications allow us to achieve a more realistic facial depiction for archaeological casework. The shape of the face and positioning of the facial features are guided by anatomical standards and scientific estimation methods. The textural choices, however, often relies on the artistic ability of the practitioner. We recognised that practitioner biases may impact the choice of textures and final display of the facial depiction for public audiences. The choices we have made here are related to the contemporary population and historical information”.

The craniofacial reconstruction is now on display at the Medieval Mile Museum.