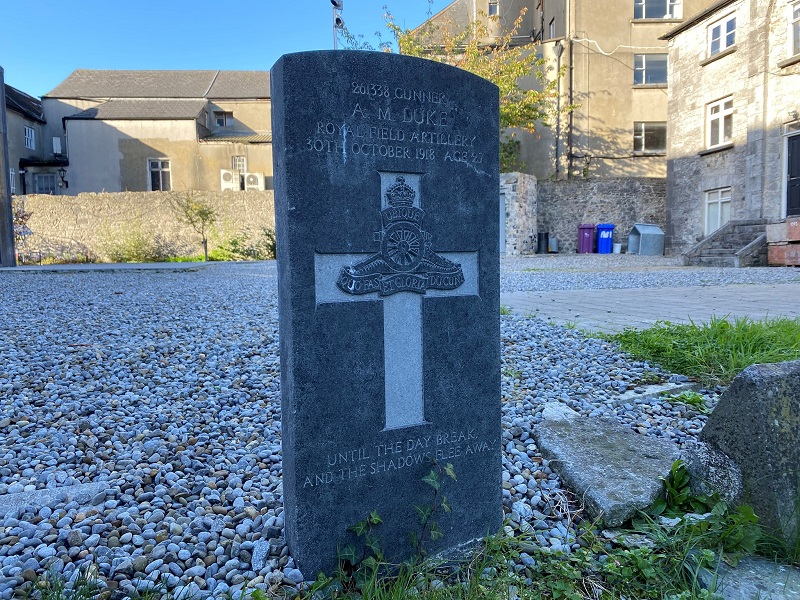 The Medieval Mile Museum welcomed Transition Year student, Isabelle Bowden, from Presentation Secondary School, Loughboy, for work experience.
Isabelle is the first student to take part in the museum’s ‘Remember Me’ project. Students taking part in the project are invited to choose a grave within the museum grounds that moves or intrigues them and to carry out research on the person behind the grave. Who were they and what kind of life did they live? What information on the person can we piece together and what is lost to history?
Students are invited to respond creatively to their research, writing a piece on the information they found out about the person buried and their thoughts about that person’s life. We’re delighted to present Isabelle’s creative response to the grave of Alexander Mark Duke, buried in St. Mary’s Graveyard on this day 103 years ago – 30th October 1918.
Alexander Mark Duke By Isabelle Bowden
Alexander Mark Duke was born in Mountmellick, Laois, Ireland to George Noble Duke and Helen Scalon Duke. There isn’t much information about his earlier life other than they moved residence two times. In 1901, the Duke family were living at the RIC Barracks at Ballyragget, Co. Kilkenny. In 1911, the Duke family were living at William St. Kilkenny, where George Noble Duke was a Clerk to the Clerk of the Peace. In 1911, Alexander was 19 years old, a Solicitor’s general clerk at Messrs James Pöe & Sons Solicitors. When he joined the war – presumably in 1914 – he served with “A” Battery, 7th Reserved Brigade. He served with this unit for his entire military career, until his death, on the 30th of October, 1918 at age 27.
His place of death is a bit blurry, but from what I’ve found, he was admitted to a military hospital in Salisbury and then sent home, where he died. There isn’t a lot of information out there on Duke, and I speculate that is partly because of his rank, he was a Gunner, which would have been the equivalent of a Private, a foot soldier. In the First World War, not only was record keeping not at its finest, but the men in charge, who started the war, more often than not saw anyone with a rank lower than Sergeant as just a number, a sacrifice.
Even more tragic is the awful timing of Duke’s death, if he had survived for one more week, twelve days, he would have seen the end of the war. He would have seen that all his and his comrades suffering had a result, an end. I can’t imagine his life in Ireland was too exciting, save maybe if he had any stories about or even any involvement in the 1916 rising. However, I think I can safely speculate that his life in the military was a bit more eventful. I’m not foolish enough to think it fun though, it must have been a hardship. Cold, wet weather, without weather appropriate clothing, gunfire and bombs. The invention of Mustard Gas and the Flamethrower and seeing them in the battlefield must have been traumatizing beyond comparison. The loss of so many, some friends, and still having to push on, because mourning in the moment could cost another life. Duke is buried and commemorated at Saint Mary’s Church of Ireland (the graveyard of The Medieval Mile Museum).
Alexander Mark Duke’s life in battle must have been true hell. I can’t even begin to imagine what he was feeling through all of it, but in his name, and every other name on the roll of honour, I write this, and condemn those who started that war and cost so many their lives. Duke could have become a fantastic solicitor, and have gone on to do big things, but he was robbed of that. For a race who fears the concept of everlasting hell so deeply, we are excellent at creating that environment for ourselves on earth.